KENNEDY SPACE CENTER: Five-time shuttle astronaut Steve Lindsey met with the press today at Kennedy Space Center to unveil a test cargo module that will become an integral part of the Dream Chaser. Lindsey reminisced about seeing shooting stars from above when he was on the ISS. Since the cargo module is designed to burn up on re-entry, it was renamed "Shooting Star" a day before the event.

Sierra Nevada Corporation (SNC) delivered a test version of its Shooting Star cago module to NASA's Kennedy Space Center for testing ahead of its planned launch with SNC's Dream Chaser spacecraft in 2021.

A key capability for Dream Chaser is performing cargo disposal on re-entry. SNC's Shooting Star cargo modules burn up in the Earth's atmosphere, discarding unwanted material offloaded from the ISS.

The Shooting Star is mounted to the aft portion of Dream Chaser and provides:

Internally, the Shooting Star provides a normal cabin environment for the space station crew to work and operate in. The crew, working in shirtsleeves can unload the 7,600 pounds of cargo from the cargo module.
Since each Shooting Star burns up on re-entry, SNC will be building at least six of the cargo modules. 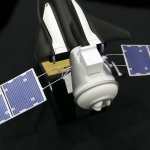 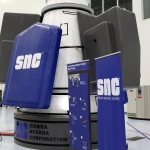 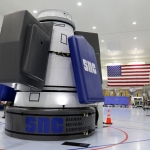 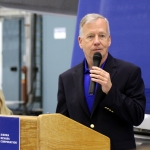