FIREX-AQ Seeks to Characterize Smoke from Wildfires and Controlled Burns

NASA, NOAA and their partner agencies have begun a seven-week study of the impact of smoke on air quality and climate. Based in Boise, Idaho, the Fire Influence on Regional To Global Environments and Air Quality (FIREX-AQ) strives for better management of public health risks from smoke (NASA estimates the annual health costs associated with smoke to be close to 20 million dollars), understanding smoke’s influence on weather, improved air quality, and to be able to manage agriculture and government controlled burns to be done with “the right fire, at the right place, and at the right time.”

The smoke from Wildfires is complex; the fuel being burned (pine, sagebrush, grass) plays a role. Recent weather impacts the amount of water content of materials on the ground. During FIREX-AQ, the agencies will compare satellite data with aircraft-based data to build a better model for satellite predictions.

Before FIREX-AQ, the most comprehensive study on wildfires drew from just 39 fires. Compare that to the 58,000 wildfires tracked in 2018.

Boise is an Ideal Epicenter for the Study of Wildfires

I have flown small planes in the Idaho wilderness for many years. There are a lot of challenges flying mountains and canyons and perhaps one of the biggest of those challenges can be smoke from forest fires. It is not uncommon in Idaho’s late summers for the smoke to be so thick that all flying has to be done under IFR conditions (Instrument Flight Rules), and flying in the bush just can’t be done safely. Over the last ten years the number of forest fires in Idaho and the resulting accumulation of smoke has increased dramatically.

The objective of FIREX is to research the composition and chemistry of smoke from wildfires and managed/agricultural burning to better understand the impact of smoke on air quality and climate.

In addition, they want to find the answers for what are the emissions of gases and aerosols from forest fires, what chemical transformations affect those emissions, what is the local, regional, and long term impacts from North American fires, and how can satellites measurements continue to assist in answering all of these questions. The platforms for the project include satellites, ground based mobile laboratories, ground based scientists, and multiple aircraft.

Aircraft Used In the Study

As an aviator, the aircraft were what I was drawn to the most at the media event. The project aircraft include NASA’s high altitude ER-2 (Think U-2 spy plane on steroids), two NOAA De Havilland Twin Otters, and NASA’s archaic Douglas D-C 8 Airborne Science Laboratory.

The ER-2 will fly at 70,000 feet and will simulate the measurements received by current satellites. This will be compared with detailed measurements from the DC-8 and Twin Otters.

I got to tour one of the Otters and the DC-8 at the media event. These two planes will operate for four weeks out of the Boise airport for the project. Both were packed with scientific equipment and workstations for scientists.

DC-8s are a throwback to the start of the jet age for airlines. They first flew in 1959 and was Douglas’s answer to the first jet passenger plane, the Boing 707. Modern airliners just have a pilot and copilot. NASA’s crew for their D-C 8 has a pilot, copilot, flight engineer, a navigator, and a backup navigator. Modern airlines have glass cockpit panels (computer screens). But this old girl still had all the original analog instruments and is packed with switches, gauges, and knobs that encompass the four-man crew. It was fun to know there are still people who know how to fly planes like this.

I talked to the Science Laboratory’s captain, Captain Dave. Dave said he didn’t apply for the job, NASA applied for him. He got a phone call from NASA one day and they said “We hear you can fly a DC-8. Would you like a job?” Captain Dave told me at times they fly the DC-8 as low as 1,000 feet above the fires. I commented that it must be very turbulent over the fires. He replied that it was, but the worst part was the heat inside the cockpit. The antiquated air conditioning of the Eight “just can’t keep up with hot outside temperatures, crew and scientist body heat, and all the heat from the scientific equipment.”

I also got to chat with Captain Wood and Lieutenant Mason, the pilots for the De Havilland Twin Otter. I didn’t know it, but NOAA pilots are a separate branch of military service. They get their primary flight training through the Coast Guard. The Twin Otter is a venerable bush plane workhorse in Canada and Alaska. It first flew in 1965 and you could pick one up for $680,000. Production of the Otter stopped in 1988. But in 2005 a new company started building them again. Currently you can buy one for a mere $6,500,000. I talked with Lieutenant Mason about flying the Otter.

Me: “How do you like flying the Otter Lieutenant?”

Lieutenant Mason: “It’s a great plane and a lot of fun to fly.”

Me: “Would you care to expand on that Lieutenant?”

Lieutenant Mason: “It’s a fabulous plane and a blast to fly.”

The seven week project is spearheaded by NASA and NOAA with partnering agencies that include National Science Foundation, U.S. Forest Service, EPA, Bureau of Land Management, along with a large list of U.S. and foreign universities. The aircraft will fly from Boise Idaho during the rest of July and the first half of August. On August 19, the NASA DC-8 flies to Salina Kansas to measure smoke from agricultural controlled burns. The final phase of the mission will focus on smoke from a U.S. Forest Service prescribed burn in October or November.

NASA and NOAA are researching the chemistry of smoke from wildfires during the summer of 2019. 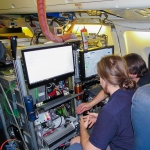 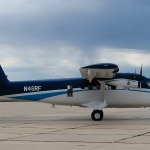 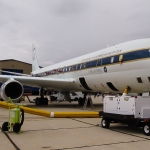 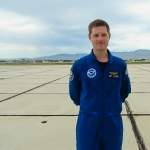 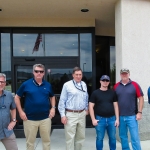 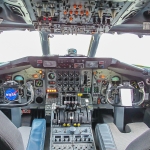 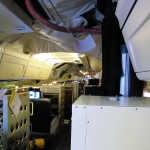