CAPE CANAVERAL AIR FORCE STATION: Anyone on Cocoa Beach tomorrow at 7AM will witness a fascinating show during the unmanned Orion Ascent Abort Test 2. The four-hour launch window begins at 7 AM on Tuesday July 2, 2019 with a back-up launch day of July 3, 2019.

This will be the second test of the Launch Abort System (LAS). While the first test was from a test stand, this launch is going to be from a ascending Orion capsule that is still in the atmosphere - there will be tremendous forces on the vehicle during the test, according to Mark Kirasich, Orion program manager.

Jenny Devolites, Ascent Abort-2 test conductor explains what to watch for during the launch:

Randy Bresnik, NASA astronaut explained what a crew member would feel during the abort.

The crew will experience 7G force in the Z direction. 7G will get your attention. Because you are accellerating in the Z-direction, the blood will be pulling out of your head. We've practiced this at NASA. The good news is that since the abort happens in the first few minutes, we have not been in space in 5 months. After the initial pull away, it will be a pretty benign ride on the parachutes. The Soyuz capsule experiences 5-6G during an abort. The Orion abort will feel like 1.5 to 2 elephants standing on your chest.

The abort could be signaled by the SLS rocket, by the Orion Crew Capsule, or manually by the astronauts on board. If the abort is triggered by either of the automated methods, a sensor on board the crew capsule would alert the crew of the impending abort.

You have to prepare for it, even though it is a low chance of happening. It had been 35 years since a launch abort. But the Russians reacted as as if they expected it every launch for the last 35 years.

Mark Kirasich explained that with Vice President Pence's announcement that Artemis should land on the moon by 2024, everyone's focus has sharpened. Timelines have shortened. They are going ahead with the Orion Ascent Abort Test now in order to get the data they need, instead of waiting for parachutes to be ready. 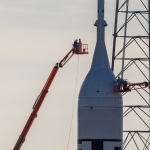 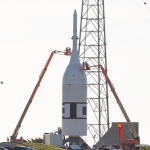