At 2:30 am EDT Tuesday, June 25 a SpaceX Falcon Heavy lofted a payload containing 24 satellites to 3 different orbit levels. This launch achieved many firsts for SpaceX and its customers including the US Air Force. Since there were multiple customers this payload was described as a ‘ride-share’ as it contained payloads from NOAA, NASA, Department of Defense, several university projects and a few other countries.

Because the Falcon Heavy is essentially 3 Falcon 9 rockets strapped together there was a great deal of venting that, at times, obscured the majority of the first and second stages. Falcon Heavy is able to launch the heaviest payloads at 143,600 pounds compared to the Space Shuttle system at 54,000 pounds, or the Ariane 5ES at 44,100 pounds. Each of the first stage cores utilizes 9 Merlin engines which also allow for an ‘engine-out’ capability without jeopardizing the mission.

The first payload to be placed into orbit is called OCULUS; a project by Michigan Technological University and conducted for USAF. This package will help calibrate ground based observations of spacecraft altitude. It has special surfaces which have distinct spectra and shapes and the satellite will record altitude time history for correction of ground-based observations.

Following OCULUS will be the first of the CubeSat deployments. E-TBEx will measure distortion of radios signals in the ionosphere. This experiment will be conducted at 6 orbital locations using COSMIC-2 and the twin E-TBEx cubesats. Next is the Launch Environmental Observer (LEO) which will measure temperature and vibration during launch then will demonstrate Wi-Fi communication between two separate cubesats.

Another vehicle called PSAT will support amateur radio data relay which will assist students and researchers worldwide. TEPCE is an experiment in propulsion using an electrically conductive tether 1000 meters long. It is expected to demonstrate orbit-changing movements without the use of any fuel.

Next is an engine burn to gain altitude where PROX1 is to be released. This is a microsat developed at Georgia Institute of Technology along with the Air Force. It will be used to explore close encounters with other satellites and will be the device to deploy the LightSail 2, a citizen-funded experiment being overseen by The Planetary Society.

NPSat will be deployed at the same altitude for the Navy in order to continue exploration of space weather, support situational awareness, and will look at ionospheric electron density which impacts communications and navigation.

Orbital Test Bed (OTB) a product of General Atomics Electromagnetic systems is a modular hosting platform carrying several payloads. The first is the Atomic Clock which will be tested as a means of initiating commands at specific times despite the long time for communication from earth.

Following OTB will be the GPIM or Green Propellant Infusion Mission. This is a test for NASA to validate safer and less expensive fuel which will also improve propulsion efficiency.

COSMIC-2, mentioned earlier, is a joint project of NOAA, USAF, JPL, Taiwan’s National Space Organization, the UK’s Surrey Satellite Technology Ltd., the Brazil Institute of Space Research and the Australia Bureau of Meteorology. It will consist of a group, or constellation, of 6 satellites to measure moisture and temperature utilizing atmospheric interference in radio signals

After the next 2nd stage burn the DSX project will be launched at a medium earth orbit or MEO. These experiments are being conducted by the Air Force Research Laboratory’s Space Vehicle Directorate’s Demonstration and Science Experiments spacecraft (DSX). The experiments will look at the harsh environment of space using 3 main experiments.

After coasting for several hours the second stage will conduct a “propulsive passivation” which is a release of pressure but not an engine ignition. Despite a lack of ignition this venting will generate propulsion by using pressure in the fuel tanks to push the vehicle. 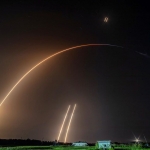