Minotaur 1, is a 4 or 5 stage rocket consisting of two Solid Propellant stages taken from a retired Minuteman ICBM and modified, mated to two more stages developed by Northrop Grumman for use in their Pegasus orbital vehicles and sometimes an optional 5th stage. This is quite different from the Greek mythological Minotaur which is “A fabulous monster with the body of a human but the head of a bull.”

The Minotaur 1 has proven to be a highly reliable launch vehicle with 11 successful launches beginning in January 2000 and continuing through November of 2013 (Wikipedia). It is 63 feet tall (19.21 M) and 5 feet 6 inches in diameter (1.67 meters). The payload may have a mass up to 1,280 pounds (580 Kg) for low earth orbital launches. The NROL-111 payload consists of 3 devices. NRO is a Department of Defense organization which develops, acquires, launches and operates America’s reconnaissance satellites. They also operate data processing facilities in support of national security. The information gathered by NRO is integrated with that of other mission partners to produce intelligence products for the President, Congress, national policymakers, warfighters and civil users. Other members of the Minotaur family are designated IV, V and VI, each with a greater payload capacity.

15 June, 2021, the fourth planned launch date, started with rain showers. Media were treated to a break in the weather and after the final participant arrived we headed over in caravan. Shortly after arriving an announcement was made of Lightning hazard and all were to stay in their vehicles which was immediately followed by rolling thunder. The delay was a minimal 30 minutes at which time the countdown was resumed for a 9:35 am EDT (13:35 Zulu) launch. The checklist was approximately 100 items for the delayed launch and all checks were green or go as the countdown progressed. The vehicle and its gantry were visible across the marsh and when the order came to move the gantry back it was over quite quickly and many observers missed the transition. The sun had already come up and with the gantry out of the way it was possible to see the orange insulation jacket. This covering allowed conditioned air to be pumped around the lower stages simulating the environment of Minuteman silos. This jacket falls away during launch and has been nicknamed the banana, or banana peel.

At T-30 minutes a weather review was conducted due to a layer of clouds that had moved in. The weather office announced that there was a broken layer at 1,000 feet and a second one at 2,300 to 2,400 feet. It did not present a launch violation but did create a “skyscreen” violation. At T-10 minutes a flurry of check items were announced including items such as switch to internal power, and final destruct arming. A few moments later the range safety checks were completed and most of the photographers in my area were quite busy making the final, final, adjustments to equipment. Throughout the morning we were able to keep up with the countdown progress, weather delays, item rechecks, determination that certain situations such as a non-working monitor etc. were not cause to cancel and when T-10 seconds was announced almost all became intently focused on the rocket and began running equipment. At T-0 the ignition flashed bright white and NROL-111 was off.

Riding atop it’s plume of solid rocket fuel exhaust the rocket rose up to the first cloud layer and just before it hit the 1,000 foot layer we could hear the roar of the engine. After a couple of seconds the rocket reappeared and kept rising to the second layer of clouds at approximately 2,400 feet and disappeared. Over the PA systems we kept getting updates as to altitude and speed, and that conditions and flight were nominal. Bermuda tracking picked it up and it kept rising and going faster. At some point the first stage burned out and an announcement was made that the rocket was down to 25% of it’s launch weight. Finally the 4th stage ignited and burned for approximately 140 seconds and the three components to the payload were positioned for their missions. 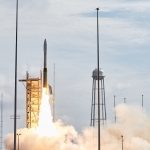 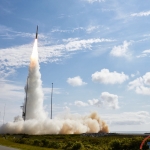 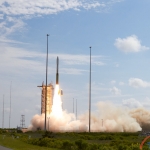 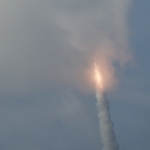 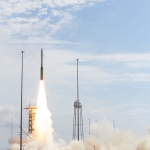 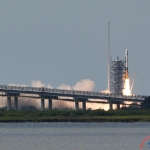 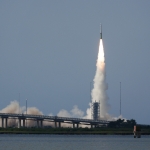