KENNEDY SPACE CENTER -- On the morning of October 12, 2019, members of the news media were invited to witness the 7th and final test of the Space Launch System’s Water Suppression System at Launch Complex 39-B.

After a series of postponements, the water suppressions test started with a T-Zero that occurred at 12:01 EDT.

This test is one of the checkouts between the launch pad and the mobile launcher. The water suppression system is used to blanket the pad in 450,000 gallons of water, to dampen the sounds and vibrations that are given off at the time of launch. At ignition and liftoff, the Space Launch System rocket produces nearly 9 million pounds of thrust as it departs the launch pad. The water suppression system helps to minimize any possible damage as the rocket ascends into space.

The Sound Suppression Water System was added to Launch Complex 39 during the development of the Space Shuttle program. The system was designed with two goals in mind: to protect the space shuttle orbiter and payload from the acoustic and thermal energy of the engines, and to absorb some of the energy from the the shuttle's twin solid rocket boosters which would otherwise reflect back from the surface of the launch pad and could potentially damage the shuttle's tail and control surfaces. 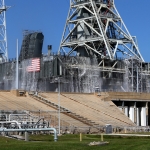 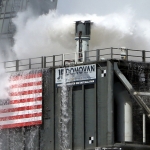 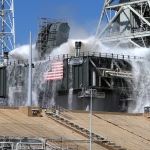 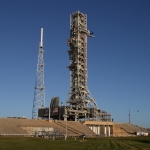