Launching a Pegasus Rocket from a Jet

CAPE CANAVERAL FL: What is it like to be flying a jet just 1,500 feet away from an igniting rocket? Orbital ATK has flown their mobile L1011 Pegasus rocket-launching plane back to Cape Canaveral for the first time since a pair of launches in 2003. I had a chance to meet the flight crew and ask how the aircraft evades the Pegasus rocket.

The Pegasus rocket system was developed by Orbital ATK to provide cost-effective access to space for the small satellite community. In this case, a small satellite is anything up to 1,000 pounds headed to Low-Earth Orbit. Their Stargazer jet is a modified Lockheed L1011 (pronounced L-Ten-Eleven) that is the last L1011 in operation. Back in the 1970's, Eastern Airlines debuted the L1011 as a wide-body jet for carrying up to 400 passengers on transcontinental routes. Today, the last flying L1011 has just 19 seats, but added a three-stage solid rocket underneath the fuselage. The rocket has three fins, one of which is inserted into a slot in the fuselage of the airplane.

Taking a rocket as carry on luggage

On Wednesday December 14 2016, the flight crew will depart from the Skid Strip at Cape Canaveral Air Force Station. They will take about one hour to fly to 39,000 feet to a drop box located 50 miles due east of Daytona Beach. If weather conditions are right, they will release the Pegasus rocket carrying the CYGNSS satellite constellation. Five seconds later, a crew member sitting at a launch console aft of the cockpit will ignite the rocket.

My first reaction: "You are going to be five seconds away from a rocket that is igniting?" The crew explained that they can safely get to about 1500 feet away from the rocket:

First, the rocket starts descending with an acceleration of 32 feet per second per second. In five seconds, that means the rocket drops 400 feet.

Second, you have an 18,500 kg rocket that is suddenly released from a 110,000 kg airplane. Assuming equal thrust before and after the weight is dropped, the aircraft will rise anywhere from 800 to 1000 feet in altitude. The pilots also turn to the left to get away from the center line of the rocket.

Third, the L1011 Stargazer is still under propulsion and keeps moving forward at Mach 0.82. The Pegasus rocket encounters drag in the atmosphere and begins slowing down to Mach 0.79. The airplane is now moving forward of the rocket. That's right, the rocket will be about 150 feet behind the Stargazer when they light the engine.

From the Flight Deck

Taylor also notes that they are manually flying the airplane during the launch, as the autopilot would have no ability to handle the unusual forces such as suddenly dropping 14% of the mass of the aircraft+rocket.

Facts on the Flight Plan for the CYGNSS mission

Facts About the Pegasus rocket system 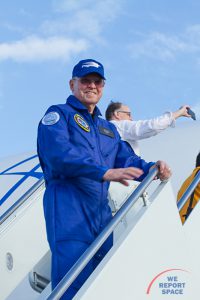 (Photo credit for all images in this article: Bill Jelen / We Report Space)