WGS constellation gets an 8th Star

Shortly before 7pm EST, United Launch Alliance sent the 8th WGS satellite on its journey to orbit, riding atop the Boeing-designed Delta IV Medium+ launch vehicle.  This satellite is the second of the "Block II Follow-on" WGS spacecraft, part of the U.S. Air Force's high capacity network providing X- and Ka-band communications to troops deployed around the world.

The launch vehicle for the December 7th mission is United Launch Alliance's Delta IV Medium+ (5,4) rocket.  The Delta IV can support two different payload fairings (four or five meter) along with two solid rocket booster configurations (two or four boosters).  The 5,4 designation for this mission indicates that the launch vehicle made use of a 5 meter payload fairing and four Orbital ATK GEM-60 strap-on solid rocket boosters.  In addition to the SRBs, all the members of the Delta IV family use an Aerojet Rocketdyne RS-68A liquid hydrogen/liquid oxygen main engine, delivering 705,000 pounds of thrust at liftoff.  The GEM-60s contribute an addition 743,000 pounds of thrust, bringing the total force of the Delta IV Medium+ to just shy of 1.5 million pounds.

A late announcement from the 45th Space Wing indicated that all the usual on-base press viewing sites would be unavailable at launch time, due to the wind direction and projected launch hazard area covering parts of Cape Canaveral Air Force Station.  As a result, members of the news media scrambled on Wednesday night to choose alternate viewing locations.  We Report Space's full Florida team was in the field for this launch, and all three of us wound up capturing long exposure, or "streak" photos of the launch, from three separate locations.

Michael Seeley opted to shoot the launch from Kennedy Space Center's Visitor Complex, framing the launch neatly between the Space Shuttle Atlantis pavilion and the KSC tour bus boarding station.  With the aid of a compass app, Mike was in position and ready for the launch, and was even able to listen in on the countdown audio provided by KSCVC for their guests.

Bill Jelen battled a series of minor setbacks (including a missing camera) to capture a photo of the rocket rising over Sykes Creek, framed neatly with a string of red and green Christmas lights.  Says Bill, "[It was] more fun than standing in Ohio snow."

For my own shot, I debated photographing the launch from the beach just behind the Cocoa Beach pier, but made a last-minute decision to head to Exploration Tower in Port Canaveral instead, opting to be a little closer to the rendezvous location for remote camera retrieval post-launch.  This was my first time experimenting with capturing star trails in addition to the launch streak, and Exploration Tower made a nice bit of foreground detail for my photo.

Next up for Delta IV

ULA's Delta IV rocket doesn't see the high volume use that its stablemate, the Atlas V enjoys.  The next scheduled mission for the Delta IV is early March 2017, for the launch of the WGS-9 satellite.  At this time, there are only four remaining flights of the Delta IV in the Medium+ configuration before its retirement by ULA in late 2018.  The Delta IV Heavy will continue to fly for an unspecified time, launching roughly once every year between 2018 and 2023. 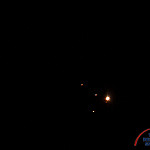 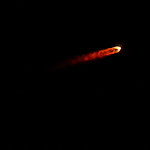 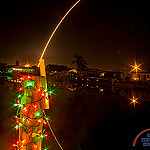 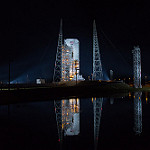 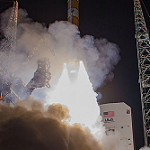 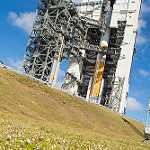 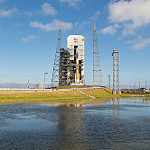 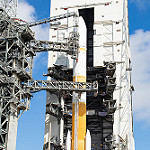 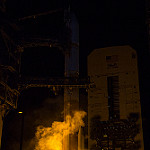 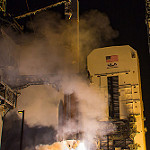 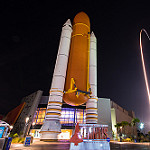 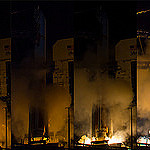 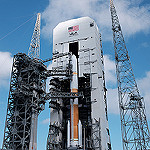 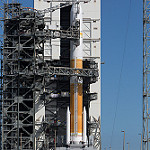 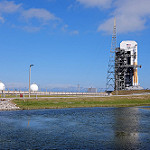 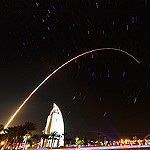 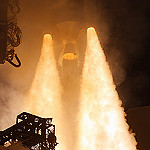 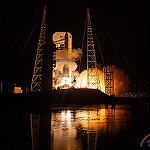 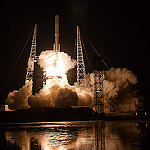 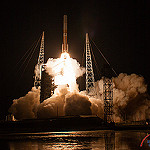 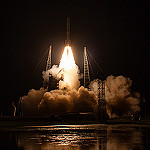 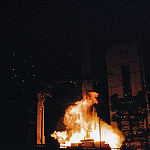 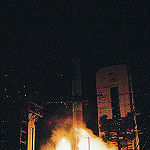 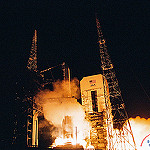 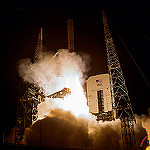 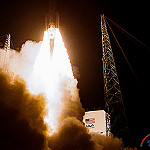