CAPE CANAVERAL: At 7:42 PM (EST) on Friday January 20, 2017, a United Launch Alliance (ULA) Atlas V rocket lifted the Lockheed-Martin Space Based Infrared System Geosynchronous Earth Orbit 3 (SBIRS GEO-3) into orbit. This is the first of 11 planned launches for ULA in 2017. The launch had been scrubbed on the prior night when the Eastern Range detected an aircraft that would have been in the box at lift-off.

Each satellite in the GEO constellation has a design life of 12 years. It is a 10,000-pound satellite powered by 2,800 watt-capable solar arrays. The system can detect short-wave, mid-wave and see-to-ground sensors. The satellite has a pointing accuracy of 0.05 degrees. It will provide information on the launch point, trajectory and projected impact points for an enemy launch.

Friday's launch went off at the beginning of the 40-minute launch window. The launch on Thursday was initially delayed by a sensor problem. After teams worked to correct that issue, the Thursday launch was scheduled for the end of the 40-minute launch window and the countdown sequence was re-started at T-4:00. It was less than a minute until the Range Safety Officer called "Hold Hold Hold" due to an aircraft in the no-fly zone.

ULA allows news organizations to place sound-activated cameras near the launch pad. Photographers meet representatives from ULA and the Air Force outside the gates of CCAFS on the day before launch. We sign in and then are escorted on to CCAFS and inside the perimeter fence of SLC-41. We generally get just over an hour to set up, focus, and test the cameras. On launch day, we photograph the launch from the ITL causeway, just under 4 miles away from the pad. After the launch, most people pack up and leave. But anyone who has to retrieve a remote camera stays on the ITL Causeway until ULA determines it is safe for the media to return to the pad. Once we get the call, the Air Force representatives escort the caravan back to the pad. Normally, I will see the CCAFS fire trucks pulling away from the pad as we are driving to the pad. But for this launch, either we drove too fast or there was a delay with the fire trucks. As we approached Pad 41 from the south, you could see streams of water from the fire trucks bathing the mobile launch platform. Back-lit by the Xenon spotlights that normally illuminate the rocket, the water canons made a memorable sight.

Also lit up by the Xenon lights - the four cables that will be part of the Crew Escape System have been installed. The cables will be used for a basket escape system and extend from the crew level of the Boeing Crew Access Tower to a safe spot outside the SLC-41 gate. 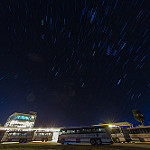 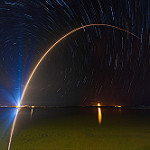 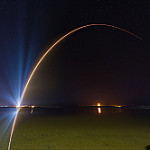 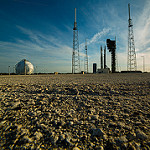 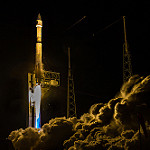 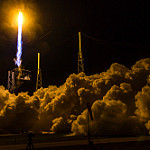 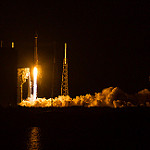 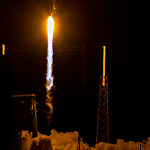 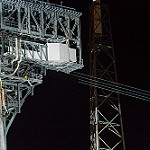 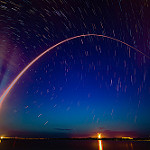 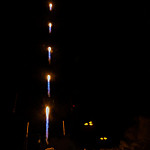