Rescheduled due to poor weather, then aborted due to ground support software issues, all was well as of 5:00 pm on the third launch attempt. The morning started off overcast and cool but the skies cleared and the temperature moved up into the upper 60s during the afternoon. Winds were blowing all day ranging from the upper teens to lighter winds of only a few miles per hour coming out of the NNW.

After the previous night’s abort a small number of members of the media went out to the launch site Friday morning to attend to their remote cameras and reset for tonights launch. (Think positive, right?)

As the launch team was polled for their final go / no-go status to enter the countdown, Northrop Grumman announced that it is proud to name the NG-14 Cygnus spacecraft after former astronaut Kalpana Chawla. It is the company’s tradition to name each Cygnus posthumously after an individual who has played a pivotal role in human spaceflight. Chawla, who was one of the seven astronauts lost in the Columbia STS-107 mission, was selected in honor of her prominent place in history as the first woman of Indian descent to go to space.

At 9:16pm (01:16 Universal time) Stage one of the Antares 230+ ignited and built up to 864,000 pounds of thrust and carried a payload of 7,500 pounds. The payload consists of crew supplies and several new pieces of equipment and experiments. On September 1st, NASA released a Media Advisory listing several of the experiments which would be carried aboard this mission:

Antares 230+ is a redesigned, stronger version of the Antares system. One of the benefits of this increased strength is that Antares does not have to throttle back as it nears maximum dynamic pressure. This also results in a shorter time to orbit of 8.5 to 9 minutes. The number ‘230+’ indicates this is a Block 1 First stage adapted to use the RD-181 engines. The second digit which is ‘3’ indicates the second stage is a Castor 30 series solid rocket booster designated Castor 30XL. The third character provides information about the third stage, but in this case the ‘0’ means there isn’t a third stage. The ‘+’ informs us this rocket has performance upgrades to the Antares 230.

For safety reasons no one is allowed closer than ~2 miles, and this observer was a bit over 6.5 miles away. As soon as the engines ignited I was able to see the flare of bright light but the sound took well over 30 seconds to reach the distance to where I was viewing. The brightness of the RP-1 propellant burning with the aid of liquid oxygen is so intense at night that it is hard to watch the actual rocket.

Following the rocket's progress is quite easy and even at this distance viewers are still able to feel the sound as it reverberates through your body. the time delay creates an unusual effect where the sound seems to originate from a point well behind the rocket. At about 45 seconds after the launch the volume of sound was quite loud and the peculiar crackling of sound is quite noticeable. As the rocket traveled up and over from my point of view it seemed to go over Jupiter and Saturn which were easily visible below the flare of the Antares first stage. 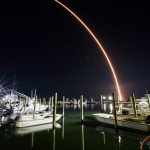 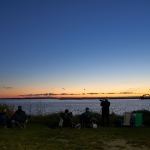 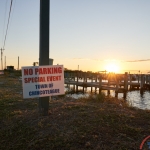 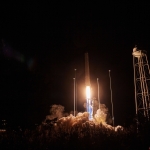 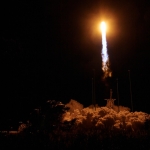 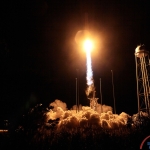 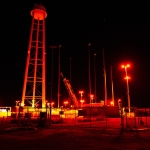 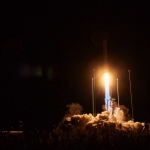 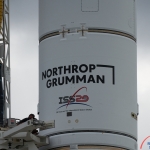 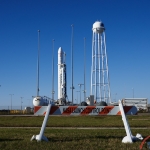