Covering the Solar Eclipse with the Viper Demo Team

On August 21, 2017, We Report Space photographers Michael Seeley and I (along with photography assistants Jenn Seeley and Dawn Haworth) traveled to Shaw Air Force Base in Sumter, SC to photograph the Total Solar Eclipse as guests of the 20th Fighter Wing and the F-16 Viper Demo Team.  The team was able to place two F-16 Fighting Falcon jets on the ramp adjacent to Runway 04L for us to incorporate into our photos of the eclipse.

Sumter, and Shaw AFB sits on the northern edge of the path of totality, giving us 105 seconds of darkness starting at 2:45pm EDT.  Our setup on the day of the eclipse began Monday morning with the Public Affairs team from the 20th Fighter Wing, but our preparation had started days before in identifying the path and height of the sun, and ideal placement of assets on the ground for the best possible photos.

Our plans, roughly, were to use a pair of cameras with long lenses (one telephoto, one telescope) to capture up-close details of the eclipse. We would support those with a series of still cameras with wide angle lenses to capture photos of the F-16 jets on the ramp with the blacked-out sun overhead.

Mike worked extensively with the PhotoPills app on iOS to plot the start & stop points of the eclipse relative to Sumter, SC, and coordinated with the Viper Demo Team on a pair of potential shooting locations on base.

In the weeks leading up to the eclipse, we purchased ISO-certified solar glasses and camera filters.  In the days before the eclipse, we would carry our cameras out into the sun with filters & computer controllers to test exposures, composition, and timing.  Mike set up time lapse photos of playground equipment as a stand-in for something roughly the size of an F-16, to determine an ideal focal length and composition.  I drove Solar Eclipse Maestro, a MacOS program which would control the telephoto shots from the start of first contact (C1) through to the completion of the eclipse (C4), through my planned script on multiple occasions to ensure that the camera and laptop would have enough battery power to survive the entire eclipse.

Setting up at Shaw

With C1 scheduled to happen just after 1pm EDT, and totality at 2:45pm, and two jets to move into position, our day at Shaw AFB started at 10am, where we were met by a Staff Sergeant from the 20th Fighter Wing Public Affairs office.  After a quick tour of the shooting area, the airmen assigned to the Viper Demo Team began moving two F-16 jets into position for us.

In one of the cooler moments in my professional and personal life, I found myself in a position to direct the placement of a pair of US Air Force jets, signaling back and forth with hand signals in between taking test shots to create a compelling arrangement of military hardware.  Since this was just a static display, the jets were moved individually by an aircraft tug under the direction of an Air Force Master Sergeant, with an airman riding inside the cockpit in order to operate the brakes, an amusing detail, but also a job any of us would have happily accepted, just for the chance to ride around in a plane.

At noon, we began hauling all our gear out to the assembly point, creating a small but well equipped photo office on the taxiway adjacent to an active runway; though no flight operations were scheduled during the eclipse, the flight line remained in an active state in the event of emergency landings -- thankfully none of those took place while we were there.

Once we had committed to the area next to the runway, the GPS coordinates were plugged into Solar Eclipse Maestro.  Mike's telescope was set up on an automatic tracking mount which would follow the march of the Sun across the sky.  My camera & telephoto lens relied on a more low-tech solution; after each photo, I'd recompose the shot in the camera to prepare for the next three minutes of solar motion.

With the telephoto and telescope in position, Mike set about arranging his wide angle cameras, and I tried to get some remote-activated lighting units in place to illuminate the jets during totality.  Ultimately, the lights wouldn't reliably trigger, so we scrapped that plan.  Airfield management also had some concerns about those particular pieces of gear, which made the decision to stop messing around with them to get them working (at the expense of ensuring other gear was ready) an easy one.

A series of low clouds and a few scattered rainstorms cursed the beginning of the eclipse for us, preventing our telephoto gear from capturing the initial contact photos, and sending us scurrying under cover to keep everything we could dry.  As the rain moved off, we double checked positioning, wiped down filters, and got back to work.

Air Force officers and enlisted personnel joined us on the flight line to observe the eclipse, both through their own eclipse glasses and through our telescope, getting a close look at the sunspots dancing on the face of the sun.  I tried (and ultimately failed) to position a camera with a 35mm lens in a position to capture both the jets and the sun, though the positioning of it did at least capture the transition from day to night and back again during totality.

Clouds flirted with the face of the Sun on and off during the entire partial phase, and a couple of significant clouds were looming just to the east drifting toward us about on schedule with the start of totality.  Naturally, we were starting to get nervous.

As totality approached, the skies began to darken.  Interestingly, while the amount of light reaching the ground was similar to that nearing sunset and twilight, since the sun was still overhead, the darkness didn't take on the traditional red/yellow hues of sunset, but instead seemed a bit like wearing sunglasses, more of a uniform grayness.

The clouds on the horizon line began to take on an orange color, setting a dramatic contrast with the blue skies overhead, and creating a colorful backdrop for the two F-16s in the foreground of our photos.

Just as totality began, Solar Eclipse Maestro announced it was safe to remove our filters and eclipse glasses.  I uncovered the telephoto camera and Mike pulled the filters from his wide angle shots, and with the computer controlling the telephoto exposures, I gave my full attention to trying to capture some photos with a hand-held camera while also taking a few moments to appreciate the spectacle of totality with my naked eyes.

Not having a great idea how dark the ground was going to be, my frantic photos were taken as a series of shots where I was constantly adjusting the camera's ISO setting to keep from introducing motion blur in my photos.  In retrospect, at this point I wish I had figured out a safe way to illuminate the jets on the runway, as exposing for both the ground and the sky was more challenging than I had anticipated.

The one minute and forty five seconds of totality seemed to pass in a flash, and as the sun started to re-emerge from behind the moon, Solar Eclipse Maestro notified us that it was time to replace our filters (and return to using eclipse glasses to view totality).  It was at this moment that the telescope gave us our second unpleasant surprise.  We had been so focused on all the other gear, that neither Mike nor I remembered to pull the filter off the front of the telescope, which rendered its shots during totality as somewhat useless.  We're chalking this one up to trying to manage too many cameras -- nine, between the four of us -- in such a short period of time.

As the moon continued to move off the face of the sun, the clouds which had been plaguing us throughout the earlier phases of the eclipse had completely vacated the skies over South Carolina, giving us a clear view of the third to fourth contact (C3, C4) phases.  After totality, a number of our USAF spectators drifted back to their duty stations, leaving us with just our media escorts.  It was also a strange feeling to not rush right to the computer to process the photos we'd shot, but the computer was still busy driving the telephoto cameras, and the telephoto cameras were still busy taking photos.  As a result, we got our first look at most of our photos a few hours after totality, after we'd packed away all our gear and cleaned up our temporary photo office off the flight line.

At the end of the day, Mike & I both ended up with images we were very happy to capture, as well as a sense of wonder at just how cool it is to be in the path of totality during a total solar eclipse.  We both chalked up the various times that things didn't work as well as possible as a learning experience, and will apply those lessons in 2024, during the next total eclipse to cross the continental United States.

Our sincere and heartfelt appreciate go out to the members of the Viper Demo Team and 20th Fighter Wing Public Affairs Office, who were the most gracious, supportive, and enthusiastic hosts we could have ever hoped to meet.  We also could not have accomplished all we did without the help of Jenn Seeley and Dawn Haworth, who never uttered a word of complaint about the long hours, hot temperatures, unexpected clouds and rain, and heavy gear that had to be transferred  from personal vehicles to ones cleared for access to the runway, and back out again.

Did you know that We Report Space's photographers sell prints of their launch and space-related photos?  If you'd like to buy any of Mike Seeley's photos, visit Photos Of Stuff; for Jared Haworth's, visit We Had Today Photography 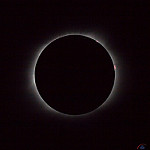 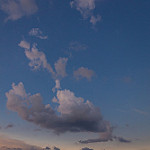 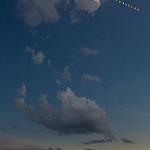 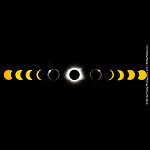 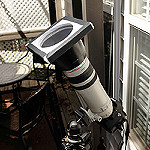 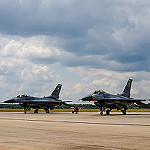 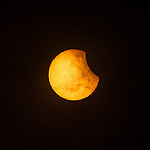 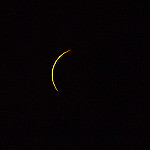 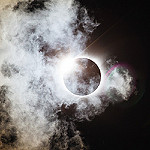 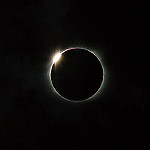 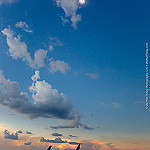 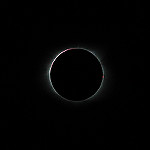 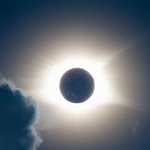 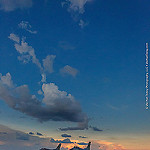 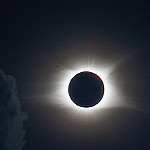 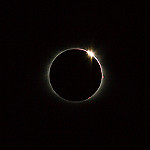 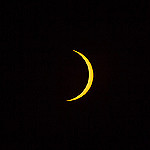 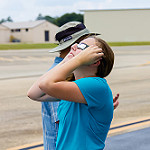