ULA
February 10, 2016
Jared Haworth
launch, atlas v, gps iif-12
United Launch Alliance (ULA) kicked off their 2016 manifest with the launch of Boeing's GPS IIF-12 on February 5th from Cape Canaveral Air Force Station. This was the twelfth and final GPS Block IIF satellite to join the existing network of US Air Force Navstar Global Positioning Service satellites orbiting the earth. The Block IIF operational history stretches back to May 2010, when the first satellite was launched atop a ULA Delta IV Medium+(4,2) launch vehicle.

ULA has been the sole launch services provider for GPS satellites since its inception in 2006, and all prior GPS satellites have been launched by the two parent companies who share ownership of ULA: Lockheed Martin and Boeing.

We Report Space was on hand at Cape Canaveral Air Force Station last week to cover the launch of the Atlas V 401 rocket carrying GPS IIF-12 to orbit.  ULA's initial launch window was shifted from February 3rd to February 5th, to allow additional time in preparing the launch vehicle, particularly in inspection of the electrical connections of the Atlas V booster.  Media were granted access to Space Launch Complex 41 (SLC-41) on Thursday afternoon to place sound- and timer-activated remote cameras, and received their first look at the fully integrated Atlas V rocket and encapsulated GPS payload in person.

An overnight rain storm and launch day concerns over high winds wound up having no impact the countdown process, which exited a planned 30 minute hold four minutes prior to liftoff.  At 8:38am, the RD AMROSS RD-180 main engine was ignited, and the Atlas V ascended to orbit carrying the latest GPS satellite.  Crystal clear skies over Florida gave a perfect view of the rocket all the way through the completion of its first-stage burn, even evincing a small amount of the high altitude plume which was so prominently visible on launches last year. 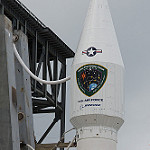 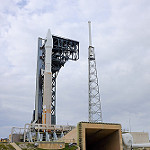 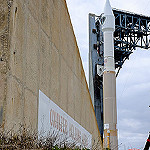 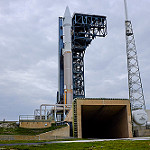 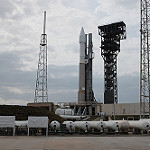 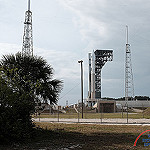 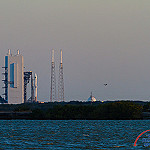 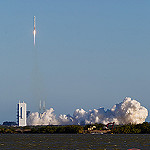 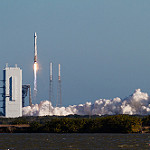 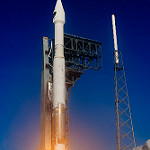 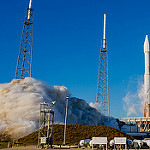 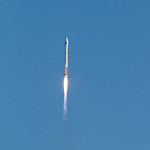 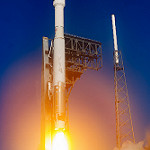 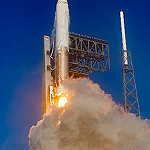 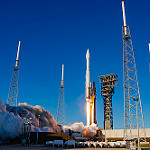 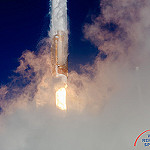 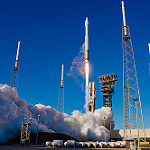 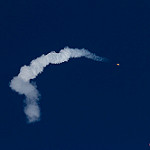 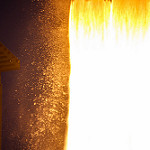 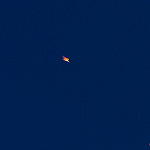