CAPE CANAVERAL AIR FORCE STATION: Rosie the Rocketeer, an anthropometric test device is strapped in to the Boeing Starliner capsule atop an Atlas V rocket at Cape Canaveral's Space Launch Complex 41. She is set to launch to the International Space Station at 6:36 AM on Friday December 20, 2019 for the Orbital Flight Test (OFT) mission.

Boeing's Josh Barrett from Starliner Communications explains the Starliner capsule. "It includes:The OFT launch profile is shown below. The trajectory differs from a normal Atlas launch. Barrett: "Atlas usually flies a very steep trajectory. The solids and RD-180 are very powerful - they like to take advantage of that extra thrust off the ground and then fly very steep and then the Centaur is high-efficiency but low thrust. Boeing had a requirement to have no black zones on our whole abort profile. If it is too steep and you abort off, you will come back at an angle where you will actually bounce off the atmosphere. So, we need to fly a little flatter. The booster itself will throttle down to maintain 3.5 G's on the ascent profile. Thus, Centaur has to provide more ascent than usual, and that is the reason for the dual-engine Centaur." 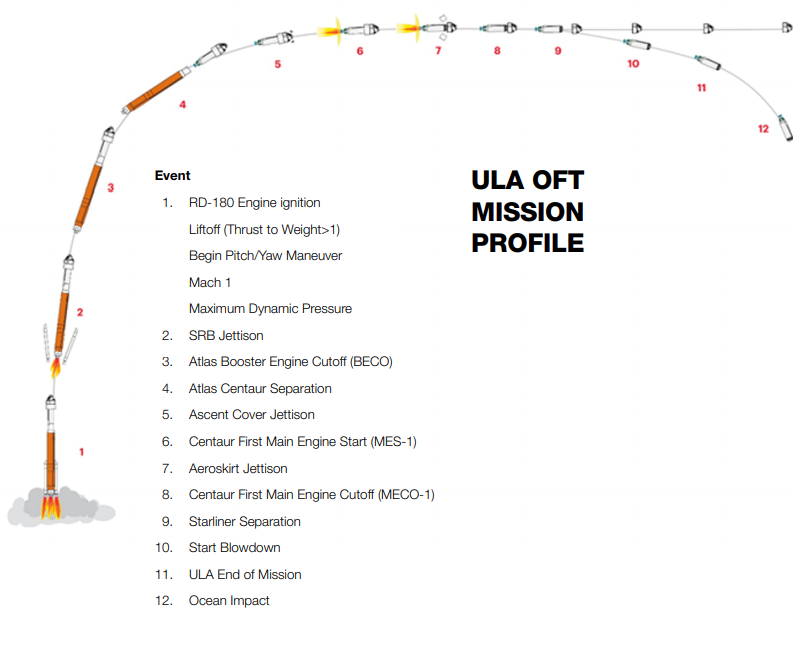 Rosie the astronaut is the first official passenger aboard the CST-100 Starliner. An anthropometric test device, Rosie will be sitting in the commander's seat. She'll be equipped with hundreds of sensors that will return critical data to the Starliner team ahead of the first crewed flight. They'll observe the forces that Rosie experiences through launch, ascent, re-entry, and landing. "One of the most recognizable and famous icons of both World War II and Boeing is Rosie the Riveteer - a persona proudly adopted by millions of women who, driven by a patriotic spirit, took jobs at shipyards, armament factories and aircraft companies. Today, Rosie is a symbol of not only the women who are blazing a trail in human spaceflight history, but also of everyone who has shown grit and determination while working tirelessly to ensure the Starliner can transport astronauts safely to and from the International Space Station."

The practice of carrying items aboard a spacecraft with the purpose of becoming meaningful souvenirs goes back to the early days of the space program. Gus Grissom took a roll of coins with him on his 15-minute suborbital flight in July 1961. In the years that followed, astronauts routinely took small bags of souvenirs with them that became small trophies for friends, family, and colleagues.

Boeing and their suppliers are flying a host of American flags, Starliner coins, and program decals. In addition, some notable souvenirs include:

Rendezvous and Docking Scheduled for Saturday

Once in a stable orbit on course for the International Space  Station, Starliner begins its rendezvous procedures. Unique to the Orbital Flight Test mission, Starliner will conduct a series of demonstration burns a few hours after launch to prove the spacecraft can maneuver itself safely in space. As Starliner closes on the station, the vehicle’s star tracker cameras will first see the orbiting lab as a distant, but bright, point of light moving in front of a background of fixed stars. Over the next few hours, Starliner will slowly move itself closer to the station and then pause before entering the 200-meter “keep out sphere” until station flight controllers clear it to enter. Starliner then begins the docking process, pausing once more  10 meters away from a Boeing-built International Docking Adapter and then continuing to final approach and docking.

All photos courtesy of Boeing.