KENNEDY SPACE CENTER: A large test article built to simulate the size and mass of the core stage of the Space Launch System arrived at the KSC turning basin this afternoon. The SLS Core Stage Pathfinder is a full-scale mockup made to be similar to the core stage in shape, size, and weight. It was built to practice for upcoming activities with the largest rocket stage in the world - the SLS Core Stage.

The rocket arrived on NASA's Pegasus barge this afternoon. Offloading will begin on Monday, September 30, 2019. The test article will be at KSC until October 31, 2019 when it will return to Stennis Space Center for further testing.Andrew Shroble: Jacobs Integrated Flow Manager for Core Stage Pathfinder: "It's been a lot of work; the wharf upgrades, work at the Center to be able to support the loads of the Core Stage Pathfinder. We've been anticipating this for some time. It was a lot of work to get ready. We have a full month planned here. On any given day, there will be 50-60 workers in the VAB for this project. This is going to be the largest rocket to ever leave the Earth and it is happening here at KSC. It will really turn some heads on Monday when we unload it from the barge. We will be doing some training for offloading, onloading, offloading. Then we will proceed to transport it along the travel path in to the VAB. Once we get to the VAB, we will be there for a couple weeks. Once we get to the north end of the transfer aisle, we will be connecting our facility crane. We will do a lift and a break over. We will be picking Pathfinder up and lowering down through the new platforms. It is real exciting stuff."

The Pathfinder is 212 feet long, 27.6 feet in diameter, and weighs 228,000 pounds. Pathfinder will validate ground support equipment, train handlers to transport the core stage on a variety of terrains with different vehicles, and show it can be integrated with facilities.

Jim Bolton, Exploration Ground Systems Core Stage Element Operations Manager explained: "The Mobile Launcher will not be in the VAB. We will extend platforms F and K, which is where the attach points are going to be. When we lift it up and over, it will be a fit check to ensure that we can process through there. While there is nothing for it to stack with, we are virtually stacking it. It will be hanging from the crane. During these four weeks, much of the activity in the VAB will be very crane-centric. We are doing lifting and rotating, and vertical and all this so our crane and handling folks are really getting exercise because of the activity we are doing.

"The core stage is 212 feet long. The cranes have been used for construction. We have technicians, engineers and crane operators who have never touched flight hardware. This will give each team a chance to take the lead on one, and then the next team on another and everyone gets an opportunity to be in the front seat, as it were."

The Pegasus barge had to be modified to carry SLS. The SLS core stage is fifty feet longer than the space shuttle external tank and, including ground support and transportation equipment, more than 600,000 pounds heavier. In 2014, crews at Conrad Shipyard LLC in Morgan City Lousiana removed a 115-section of the barge and replaced it with a 165-foot section specially designed to increase the cargo weight Pegasus can accommodate. It is not 310 feet long.

"We had a section which was 50 feet longer, manufactured, and then they moved it, and they attached the front of the barge and the back of the barge, and did welding all around that, and within the inside. So now we're 50 feet longer, we got a lot sturdier base, because the pathfinder and the core stage and all the ground support equipment is a heck of a lot heavier, so we had to make sure we didn't punch through the deck."

Mark Prill, SLS Core Stage Pathfinder Lead: "When you deal with something as large as what the pathfinder is... It's 212 feet long, it weighs 228,000 pounds, so in form, fit, it's the same as what the core stage is. When it starts rolling off, you'll see it pause about halfway, and that's in order to ballast the Pegasus, to make sure we have the proper balance before we roll off in its entirety."

"After we do that initial roll-off, then we'll be doing a cycle with two to three additional cycles before we actually roll out into the VAB. That's to give the KSC [Exploration Ground Systems] crew members an opportunity to actually physically work with the pathfinder on the transporters to be able to roll off and on and understand how all that works."

"Once we get into the VAB, what we'll end up doing there is we have to physically de-integrate the pathfinder with our ground support equipment, once we do that then we start the lift operations, and transition from a horizontal lift to a vertical lift, then it goes into High Bay 3."

On October 31, 2019, the Pathfinder will be back on the Pegasus barge to return to Stennis Space Flight Center.

On September 30, 2019, Exploration Ground Systems crew members practiced handling the core stage pathfinder as it moved off the Pegasus Barge. 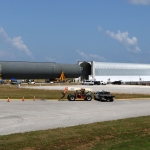 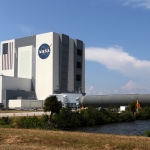 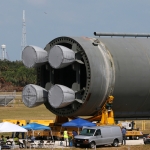 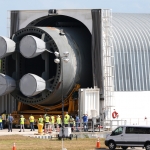 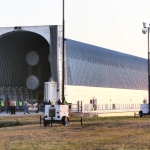 On September 27, 2019, the SLS Core Stage test article arrived at KSC for a month of ground systems testing. 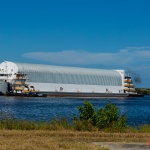 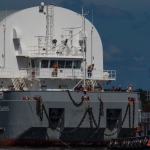 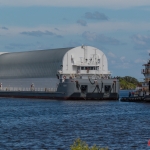 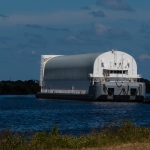 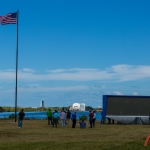 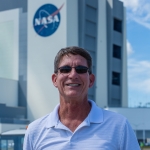 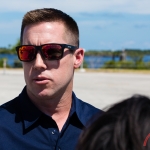